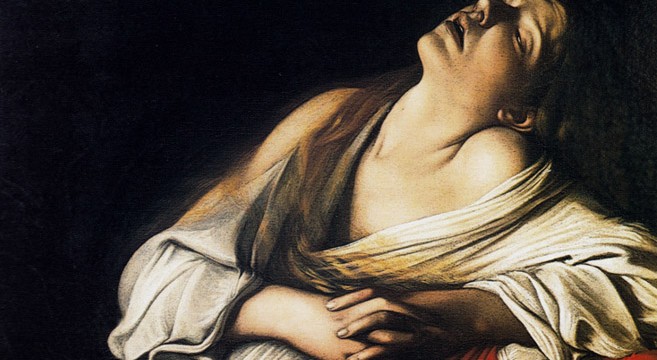 Iconic baroque master painter Caravaggio (1571-1610) painted the original Mary Magdalene In Ecstasy in 1606, but over the past few centuries its whereabouts have remained a huge mystery in the art world — until now.  Renowned Caravaggio expert Mina Gregori has revealed she recently visited a family somewhere in Europe (who wish to remain anonymous) who asked her to confirm the authenticity of a work in their private collection.  “They laid it down on the floor, I got down on my knees, and when I saw her hands, I said, ‘yes, that’s it,” she tells The Telegraph.  “It’s her.  Finally.’ ”  The 90cm x 100cm (35.4″ x 39.4″) painting, which has been reproduced in eight exemplary copies since 1602, was confirmed by Ms. Gregori as an authentic Caravaggio based on several elements.  Most significant were the colors and light on Magdalene’s hands and face, as well as the folds of her clothing.  Two other major proofs were a wax Vatican customs stamp on the canvas which was used only in the 1600s, as well as a handwritten note on the back which read: “reclined Magdalene of Caravaggio was in Chiaia [to be delivered to Cardinale Borghese].”

Caravaggio was a notorious brawler, and in 1606 he was exiled from Rome for killing his adversary, Ranuccio Tomassoni, over a gambling debt and a tennis match gone wrong.  In the months that followed, Caravaggio was hiding with the powerful Colonna noble family who protected him at their estate in the Chiaia region of Italy.  And it’s during this period when Caravaggio painted Mary Magdalene In Ecstasy.  The next documentation of the painting’s trail was found in 1994 in a secret Vatican archive.  The letter found was from the Bishop of Caserta to Cardinal Scipione Borghese of the Kingdom of Naples, informing the Cardinal of Caravaggio’s death.  It details that the boat Caravaggio was travelling on carried three paintings, one of which was Mary Magdalene In Ecstasy.

All three paintings on the boat eventually made their way to the Cardinal, and Magdalene spent many years in Naples, where Flemish painter Louis Finson made his well known reproduction which is currently on exhibit at a museum in Marseille.  From here the original painting likely travelled to Rome where it somehow made its way into a private collection.  The current owners of the painting have no plans to exhibit the painting in public.

The Mary Magdalene in Ecstasy portrays Jesus’s wife (see video below for explanation why Mary Magdalene is considered by many religious scholars to be the wife of Jesus Christ) as she is overcome seven times a day by “the delightful harmonies of the celestial choirs.”  As legend has it, Mary Magdalene was in such a profound state of grief over the death of her husband that she immediately retreated, living as a hermit in a cave in the southern France region of Aix-en-Provence.  The eight well known copies which are scattered around the world depict Mary Magdalene against a dark background, with her hands clenched, head rolled back, and eyes full of tears.  Experts believe her reclined position and bare shoulder and facial expression were meant by Caravaggio as a parallel between her brushes with ecstasy and with sexual orgasm. 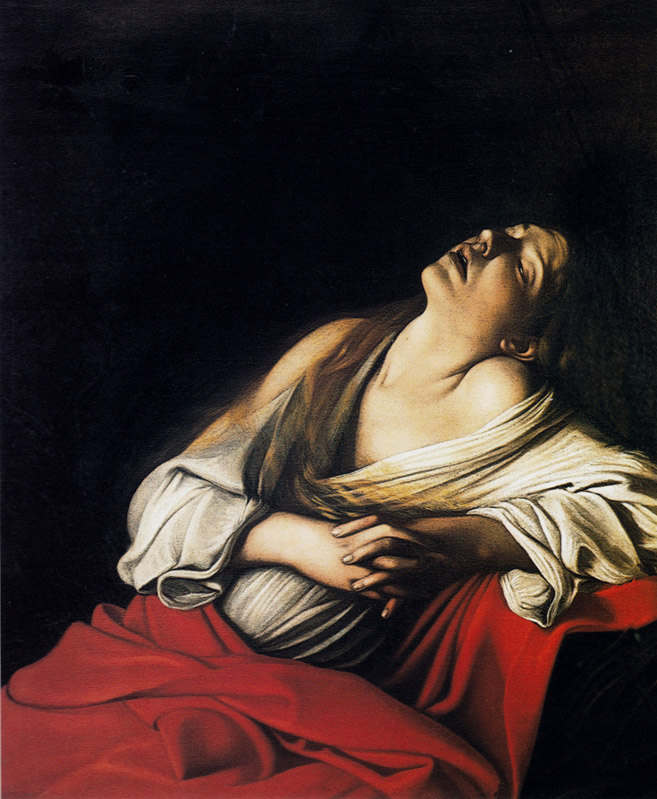