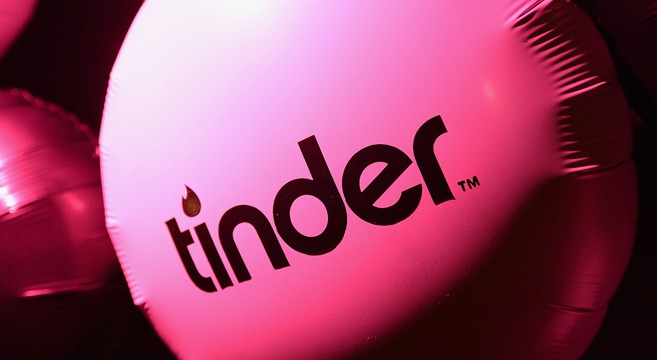 Urgent Optimism: The Science Of Tinder Addiction And How Facial Biometrics Affect Your Success Rate

Tinder is the most successful dating app in mobile history, with an astonishing 15% growth rate each and every week.  For straight users it’s an effective new tool for meeting potential soulmates, and for gay users it comes with the added bonus of bypassing around other apps which focus primarily on meaningless one-night stands (open to opinion).  But how did Tinder rise to the top of mobile dating technology?  With some ingenious engineering and a good old fashioned and highly addictive Pavlovian user experience.

In order to build an addictive app experience, Tinder’s designers had to first create a deceptively simple and elegant interface.  Once you enter your desired settings (age range, location range, and sexual preference), a seemingly infinite stream of potential lovers is pushed to your phone for the final step in your approvals process — the beauty test.  Press the red X and the ugly rejects are tossed aside.  Push the green check mark and you place the hotties in your pile of possibilities (POP).  But perhaps the most addictive phase in the Tinder experience arrives when — after adding someone new to your POP list — a notification will sometimes appear, letting you know that your newest hottie selection has already secretly added you to their POP list as well.  “It’s a match!” appears on your phone and an explosive burst of dopamine is sent rushing through your brain.

But what exactly is going on inside your brain during your “It’s a match!” peak moments?  The team at Vid Angel put together a video (below) entitled “Tinder: The Science Of Love” which gives a terrific explanation.  Known as “urgent optimism”, Tinder has built an app which successfully allows its user to play “The Game Of Love — with the pressure taken off,” as the Vid Angel team explains. “It increases the odds of you meeting someone, while lowering the odds of you failing. By reframing romance into quite literally a game, you fundamentally change how we engage in it. 80% of the time people spend playing video games they are failing at it. So why do you still go on playing for hours on end?  Simple — because you know you have a shot at winning. It’s called ‘urgent optimism’, which Jane Mcgonigal defines as, ‘extreme self motivation’ — the desire to act immediately to tackle an obstacle, combined with the belief that we have a reasonable hope of success (see Jane’s TED Talk below).”

So as Tinder continues to explode (it just made its very first match in Antarctica), its users are becoming more and more comfortable with the game of love they are slowly mastering.  And as with any game, Tinder users quickly become experts and learn ways in which to increase their odds of winning.  Perhaps the single greatest way for a Tinder user to tilt the odds in his or her favor is with the use of photography.  A brand new study just published by PNAS (Proceedings of the National Academy of Sciences of the United States of America) has unlocked the secrets of photographic “first impressions” and the research team has proven that facial features tend to convey specific personality characteristics to others with shocking consistency.  Those who participated in the study were asked to rate people’s photos based on three factors: approachability, dominance, and attractiveness.

Olga Khazan of The Atlantic writes: “What they found was that a combination of different facial features could predict the subjects’ first impressions of the person in the photo with surprising accuracy.  The physical features that were the most strongly correlated with specific impressions were the size of the person’s smile (with approachability), large eyes (with youthfulness and attractiveness), and a more masculine appearance (with dominance).  Using the correlations between facial measurements and perceived attributes, the researchers then constructed cartoon faces that were supposed to represent a given personality trait. A more approachable avatar, for example, would wear a big smile and have a slightly wider nose (see image below).”  You can read the full story by visiting The Atlantic, and read the full scientific abstract by visiting PNAS. 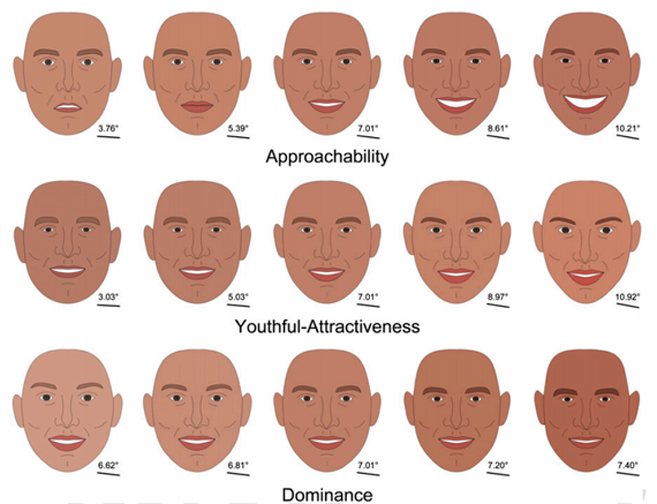