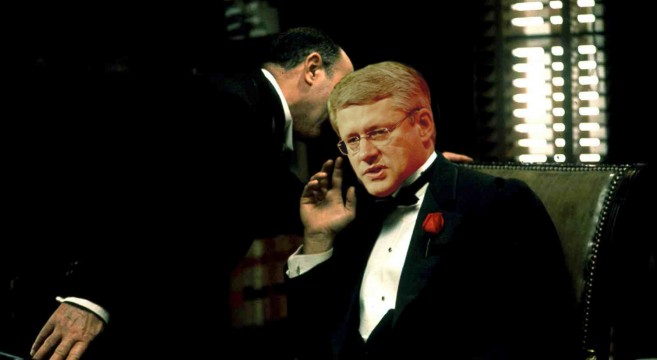 When Senator Mike Duffy promised he’d give Canadians his whole story he wasn’t kidding.  On Monday, Duffy’s lawyer Donald Bayne revealed to the press that Senator Mike Duffy’s controversial living expenses were “cleared from Day 1” by then Senate government leader Marjory LeBreton’s office (see video #2), and when they later became controversial, Duffy was pressured to take a deal from the Prime Minister’s Office.  Lawyer Donald Bayne on Monday read from emails between Duffy and LeBreton’s office as well as Prime Minister Stephen Harper‘s former chief of staff Nigel Wright and others to support his claim that Duffy did not knowingly break Senate rules.  Bayne said that when the growing scandal became politically explosive Duffy was “in effect” told by the PMO not to co-operate with auditors, Bayne said.

But on Tuesday, Senator Mike Duffy provided both the drama and a plot twist in the Senate expenses scandal worthy of the best whodunits.  Drawing on his years of experience as a broadcaster, the senator once again became a storyteller, weaving a tale of intrigue, intimidation and betrayal.  In the space of just a few minutes, Duffy portrayed Prime Minister Stephen Harper as the catalyst in what he called a conspiracy to force him to repay $90,000 in living expenses.  He told the assembled senators — who were there to debate a motion to expel him and two other senators, Pamela Wallin and Patrick Brazeau, from the upper chamber — that he was attending against the orders of his doctors who feared the exertion would worsen his existing heart condition.  He came, he said, to defend his good name.  In the process, he accused other, leading Conservatives of bribery and extortion in forcing him to repay the housing expense money that auditors had viewed as improper. And he told the senators that he can back up his claims with all kinds of emails, which are now in the hands of his lawyer and the RCMP.  In the process, the senator from Prince Edward Island has put his credibility on the line against that of the prime minister.  Duffy said he met with Harper, and the PM’s former chief of staff, Nigel Wright, on February 13 to discuss his expenses. But Harper wasn’t interested in his explanations or the truth.  “It’s not about what you did,” he quoted Harper as saying.  “It’s about the perception of what you did that’s been created in the media.  The rules are inexplicable to our base.”  Harper ordered him, Duffy said, ”Pay the money back.  End of discussion.  Nigel Wright was present throughout. Just the three of us.”

Last night the At Issue panel at CBC News discussed the impact of this political bombshell (first of 3 videos below), and the new radioactivity of Prime Minister Stephen Harper.  As one pundit describes, this is Harper’s “Lewinsky” moment, and if convicted of bribery and extortion, may be forced to resign.

NOTE: CLICK ON WHITE TEXT IN VIDEOS BELOW TO PLAY, AND BOTTOM LEFT CORNERS TO PAUSE.