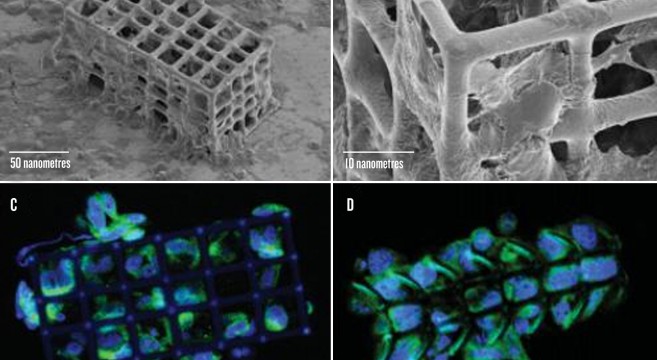 Nanotechnology is one of the most fascinating and hopeful frontiers in science, technology, and medicine.  When a machine is built at an atomic scale, there is an infinite range of possibilities for almost anything to happen.  Imagine an iPhone that could be built at such a small scale it could fit under your fingernail?  Imagine a helicopter smaller than a fruit fly?  And imagine a cargo truck filled with medicine so small it could travel through your blood stream and be guided by electromagnetism to the exact spot in your brain where it is needed the most?  All three of these ideas are in the process of being developed, and the third is the topic of a recent story in Popular Science.  Kelsey Atherton writes: “These tiny cages, each 100 microns long and 40 microns wide, may not look like much, but they are the new semi-trucks of targeted medicine delivery.  Developed by a team of Chinese researchers, in conjunction with Swiss and South Korean institutes, the nickel-coated microbots are steered wirelessly by electromagnetic fields.  Thanks to that external control, these microbots can carry precious cargo to exactly where the body needs it, in especially to sensitive places like brains or eyes.”  You can read the full story by visiting PopularScience.com.

Previous post:
Fly Away To Your Magical Place With ROOSEVELT’s Music Video For “Elliot” Next Post:
Watch Stephen King Explain Where Danny Torrance From “The Shining” Is Now