Every summer, on the first weekend in August, thousands of twins converge on Twinsburg, Ohio, a small town southeast of Cleveland named by identical twin brothers nearly two centuries ago.  They come, two by two, for the Twins Days Festival, a three-day marathon of picnics, talent shows, and look-alike contests that has grown into one of the world’s largest gatherings of twins.  It’s also grown into a research hotspot with scientists from across America trying to pull as many pairs of twins into their respective tents as possible.

In one tent research tent sponsored by the FBI, the University of Notre Dame, and West Virginia University, technicians are photographing sets of twins with high-resolution cameras, collecting their fingerprints, and scanning their irises to find out if the latest face-recognition software can tell them apart.  Right beside the FBI tent, researchers from the Monell Chemical Senses Center in Philadelphia are asking twins to sip tiny cups of alcohol to see if they react the same way to the taste.  And next to them, doctors from University Hospitals in Cleveland are quizzing twin sisters about women’s health issues.  Across the courtyard a dermatologist from Procter & Gamble is interviewing twins about skin damage.

To these scientists, and to biomedical researchers around the world, twins provide a golden ticket to unlocking the mysteries surrounding the influence of genes and the environment—of nature and nurture.  Identical twins come from the exact same fertilized egg that splits in two, therefore, they share the same genetic code.  Any differences between identical twins (i.e. one twin having younger looking skin) must be due to environmental factors such as less time spent in the sun.  Alternatively, by comparing identical twins to fraternal twins, who come from separate eggs and share half their DNA, researchers can better understand the power and influence of genes (i.e. if identical twins are more similar to each other with respect to an ailment than fraternal twins are, then vulnerability to the disease must be rooted at least in part in heredity).

Lately, however, twin studies have helped lead scientists to a radical, almost heretical new conclusion: that nature and nurture are not the only elemental forces at work. According to a recent field called epigenetics, there is a third factor also in play, one that in some cases serves as a bridge between the environment and our genes, and in others operates on its own to shape who we are.

The idea of using twins to measure the influence of heredity dates back to 1875, when the English scientist Francis Galton first suggested the approach (and coined the phrase “nature and nurture”). But twin studies took a surprising twist in the 1980s, following the discovery of numerous identical twins who’d been separated at birth.  The story began with the much publicized case of two brothers, both named Jim. Born in Piqua, Ohio, in 1939, Jim Springer and Jim Lewis were put up for adoption as babies and raised by different couples, who happened to give them the same first name. When Jim Springer reconnected with his brother at age 39 in 1979, they uncovered a string of other similarities and coincidences. Both men were six feet tall and weighed 180 pounds. Growing up, they’d both had dogs named Toy and taken family vacations in St. Pete Beach in Florida. As young men, they’d both married women named Linda, and then divorced them. Their second wives were both named Betty. They named their sons James Alan and James Allan. They’d both served as part-time sheriffs, enjoyed home carpentry projects, suffered severe headaches, smoked Salem cigarettes, and drank Miller Lite beer. Although they wore their hair differently—Jim Springer had bangs, while Jim Lewis combed his hair straight back—they had the same crooked smile, their voices were indistinguishable, and they both admitted to leaving love notes around the house for their wives.

As soon as he heard about the two Jims, Thomas Bouchard, Jr., a psychologist at the University of Minnesota, invited them to his lab in Minneapolis. There he and his team gave the brothers a series of tests that confirmed their similarities. Although each had charted his own course in life, the Jim twins, as they came to be known, seemed to have followed the same paths.  But this isn’t always the situation, as is the case for two twin brothers in Maryland.  Sam and John are identical twins and both in the first grade.  Both boys were diagnosed with autism spec­trum disorder shortly before their second birth­day, though John’s symptoms are far more severe, including constant movement, trouble speaking, and difficulty making eye contact. Sam has challenges too, mainly with social skills.  The boys are part of a research project at the Kennedy Krieger Institute in Baltimore which is attempting to unlock the the elusive third factor, outside of nature and nurture, which has a major impact on our development — epigenetics.

Epigenetic processes are chemical reactions tied to neither nature nor nurture but representing what researchers have called a “third component.” These reactions influence how our genetic code is expressed: how each gene is strengthened or weakened, even turned on or off, to build our bones, brains, and all the other parts of our bodies.  If you think of our DNA as an immense piano keyboard and our genes as keys—each key symbolizing a segment of DNA responsible for a particular note, or trait, and all the keys combining to make us who we are—then epigenetic processes determine when and how each key can be struck, changing the tune being played.

One way the study of epigenetics is revolutionizing our understanding of biology is by revealing a mechanism by which the environment directly impacts genes. Studies of animals, for example, have shown that when a rat experiences stress during pregnancy, it can cause epigenetic changes in a fetus that lead to behavioral problems as the rodent grows up. Other epige­netic changes appear to occur randomly—throwing a monkey wrench into the engine of nature versus nurture. Still other epigenetic processes are normal, such as those that guide embryonic cells as they become heart, brain, or liver cells, for example.  And though it may not happen soon, the hope is that someday epigenetic mistakes will be as simple to repair as a piano that’s out of tune.  To learn more about the implications of epigenetics you can read the article in full at National Geographic.  And I apologize for the annoying-as-hell intro by the annoying-as-hell host in the NOVA video below, but it gets good at 0:46 mark. 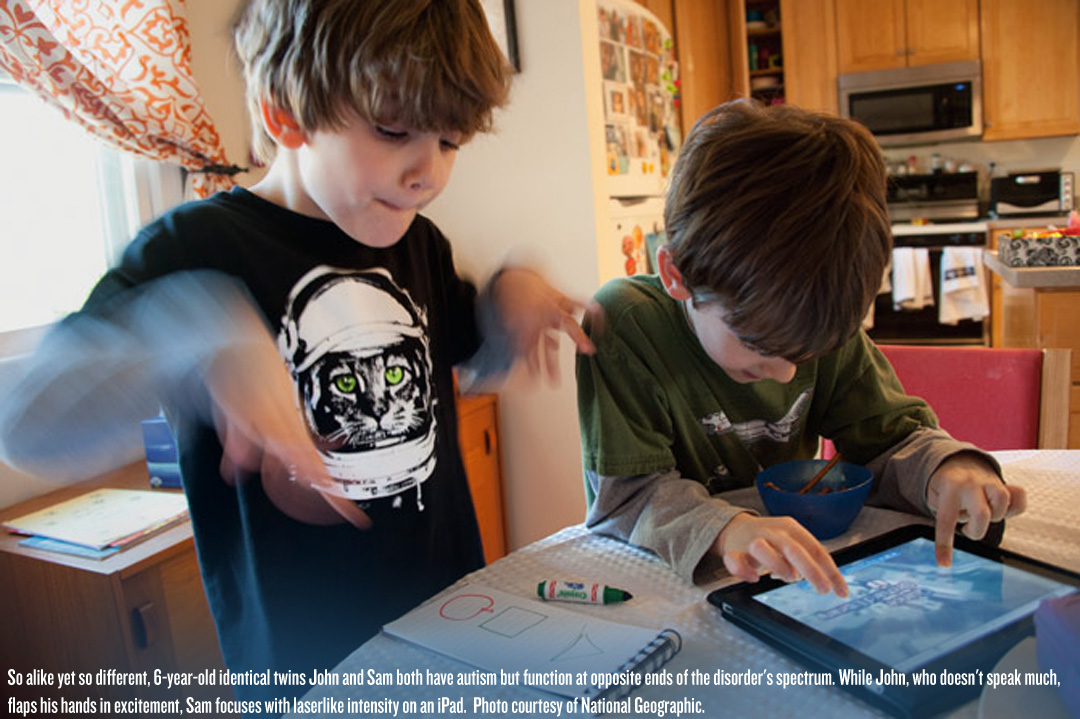 Previous post:
New Trailer For “The Dark Knight Rises” Will Rip Off Your Bat Balls And Shove Them Down Your Throat Next Post:
Check Out ESG’s Terrific Video And Cover Of Franz Ferdinand’s “What She Came For”