The sex abuse scandal that is rocking Penn State at the moment has taught us three things about the nature of these cases: 1) the young children whose lives have been destroyed by their abusers’ evil crimes are forever damaged and they deserve nothing less than swift justice, 2) the abusers themselves need to be thrown in jail for the rest of their lives, and 3) anyone who may have turned a blind eye to the actions of the abusers needs to be brought to justice as well.  Joe Paterno is the iconic football coach at Penn State, considered by the students and his millions of fans to be nothing less than a god.  Paterno, however, knew for years about what Jerry Sandusky, his assistant coach, was doing to boys as young as ten-years-old in that locker room night after night.  He told his superiors who took no action and the abuse continued for years.  Paterno’s moral bankruptcy, as well as the moral bankruptcy of Penn State President Graham Spanier resulted in their rightful termination.  Sandusky himself will soon face a judge and jury for his despicable acts.

There is no amount of justice that can ever possibly replace the lost youth and innocence of these and other victims of sex abuse, and furthermore, there is nothing mankind can do to guarantee this kind of monstrous behavior will never happen again.  What we can do, however, is rise to the full height of our moral code by reporting abuse such as this immediately to the police the very second it is witnessed in order to prevent further lives from being destroyed.  Anything less than this is disgraceful, immoral, and inhuman.  Jerry Sandusky will definitely get what’s coming to him, and Joe Paterno and Graham Spanier deserve everything that’s happening to them right now.  But their fate has highlighted a hypocrisy of epic proportions.  The current Pope, Joseph Ratzinger, has turned a blind eye to hundreds of sex abuse victims for several years, even signing documents that shuffle around these despicable priests in order for them to avoid criminal prosecution, and to prevent scandals from erupting.  Ratzinger’s complicity in these hundreds of cases can no longer go unpunished.  And it is my hope that the new light being shed on sex abuse complicity from the Paterno scandal, and the horrendous moral bankruptcy that it represents, will lead to the arrest of Pope Ratzinger for the institutionalization of child rape and torture.  If it doesn’t, then we ourselves are morally bankrupt for advocating that so long as one calls themself a priest they are above the law and are free to perpetually destroy the lives of innocent children.

CBC News’ CONNECT With Mark Kelley aired a fascinating report last night on the sex abuse complicity and coverups that plague several American football and basketball college programs across the United States.  Anchor Mark Kelley (the best broadcast journalist and investigative reporter in Canada) has a fascinating interview with Buzz Bissinger, the Pulitzer Prize-winning author of Friday Night Lights, who criticizes the football culture surrounding the Penn State abuse scandal.  His thoughts on the moral failings surrounding this boys club hush-hush culture are the best I’ve seen so far.  An absolute MUST SEE.  NBC Nightly News With Brian Williams also aired a report where TODAY Show contributing anchor, and lawyer, Savannah Guthrie breaks down the disturbing charges against Sandusky.  And finally, Christopher Hitchens explains in full detail exactly why Pope Ratzinger must stand trial for crimes against humanity. 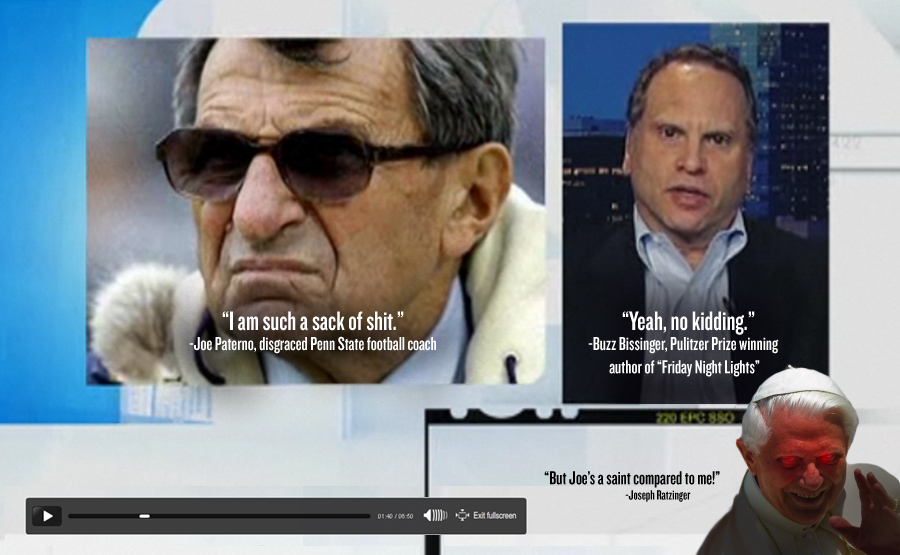 Previous post:
Critics And Fans Raving About Universal’s Spectacular New Trailer For “Snow White And The Huntsman” Next Post:
My Latest Movie “IMMORTALS” Opens Today With Lots Of Half Naked Men (And At Least One Woman)