It is a painting that first emerged in the art world about 50 years ago.  Once considered to be painted by a pupil of Leonardo Da Vinci, this portrait of Jesus Christ had at one time garnered so little attention that it sold at auction for a measly £45 ($72) in 1958.  The oil on wood panel painting, Salvator Mundi (“Saviour of the World”), depicts Christ with his right hand raised in blessing and his left hand holding a globe, and measures 18.5″ x 26″.  But that price estimation got a massive inflation when earlier this year art experts converged in London whereby they determined it to be the long lost Salvator Mundi by none other than Leonardo da Vinci himself.

It is standard etiquette with art accreditation matters of this scale an importance for those involved not to discuss the matter with the press.  The experts involved in the process, as well as officials with the National Gallery in London (where the painting makes its international debut tomorrow Wednesday November 9, 2011) refused to comment on the discovery or details of its certification.   According to the magazine ARTnews, the work is owned by a consortium of dealers, including Robert Simon, a specialist in Old Masters in New York.  A person close to the Metropolitan Museum of Art in New York who asked not to be identified said: “The painting was forgotten for years. When it turned up at auction, Simon thought it was worth taking a gamble.”

“It had been heavily overpainted, which makes it look like a copy. It was a wreck, dark and gloomy.  It had been cleaned many times in the past by people who didn’t know better. Once a restorer put artificial resin on it, which had turned grey and had to be removed painstakingly.  When they took off the overpaint, what was revealed was the original paint. You saw incredibly delicate painting. All agree it was painted by Leonardo.”

Pietro Marani is a Milan-based professor and one of the world’s preeminent experts on Leonardo da Vinci, who flew immediately to the National Gallery in London to view the painting.  By his side was Maria Teresa Fiori as well as renowned Oxford University art professor Martin Kemp, another of the world’s leading historians of da Vinci who has studied the master for nearly five decades.  In his only public comments regarding the fascinating story, Professor Marani said: “We have been asked to keep this a secret and not say anything.  The owners are very keen to keep the news quiet, they don’t want it getting out.  We were given a day to examine it and it was all the time we needed – we could tell at once that it was a work by Da Vinci and the documentation and analysis proved it beyond doubt.  This is very significant and very exciting.  It was only after the painting was restored that its true history emerged, the hair and eyebrows which had been added were removed and it was very clear.  There are lots of copies of this painting and it was popular for Da Vinci’s students to paint but this is undoubtedly by his own hand – the colours are wonderful.  The blues and the reds in the painting are very similar to those of Da Vinci’s ‘Last Supper’ and the pigment is also very similar to his ‘Virgin Of The Rocks’ painting.”

Leonardo da Vinci (1452-1519) painted the Salvator Mundi beginning in 1506 following a commission from Louis XII of France, and he completed it approximately seven years later.  The image of Christ giving his blessing to the world was a very popular subject in English and Flemish art and the half-length pose is typical of the Renaissance era as well.  Following its ownership by Louis XII, the painting came into the possession of Charles I of England and immediately following his execution it went to Charles II.  It remained in London for approximately 400 years.  It eventually ended up in the collection of Sir Francis Cook and in 1958 was sold in a Sotheby’s auction for £45 ($72) where it was misattributed as being a work by Giovanni Boltraffio, a student of da Vinci.

Leonardo da Vinci’s paintings are exceptionally rare — totaling around 15, the exact figure depending on which scholar is counting. An addition to that number, accepted by the scholarly world, is a once-in-a-century event.  The painting’s current market value is estimated to be a minimum of $200,000,000.  There is no other modern equivalent to this discovery.  If you are fortunate enough to find yourself in London you can see the extraordinary exhibition Leonardo da Vinci: Painter At The Court Of Milan running until February 5, 2012 at the National Gallery Of London.  CNN was recently privileged with an up close (and glass-free) look at Salvator Mundi and you can watch their feature story below. 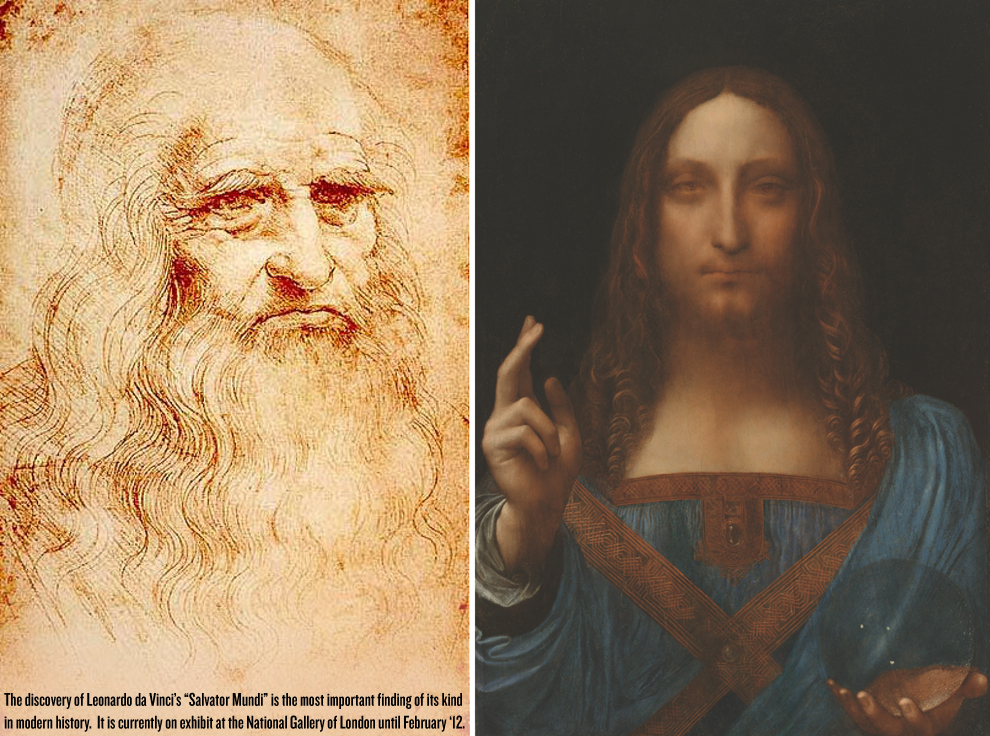