I was listening to “Tempo” the other day (see bottom for links) and heard the amazing story of composer Richard Wagner (1813-1883) and the birthday gift he presented to his wife Cosima Wagner when she turned 33 on December 25, 1870.  Wagner’s love for Cosima is the stuff of legend, and goes down in history as one of the most enduring love stories in the history of classical music.  At the crack of dawn that morning, Wagner had snuck in his small fifteen-piece orchestra and had them line the stairway that led up to his wife’s bedroom inside their Swiss villa so they could perform a symphonic poem that Wagner had written as a celebration of her birthday as well as to mark the joyous occasion of the birth of their son Siegfried the year before.  Cosima awoke to the sound of Wagner’s stunning masterwork The Siegfried Idyll wafting into her bedroom and at first she thought she was dreaming.  The following is an excerpt from Cosima’s diary:

SUNDAY, DECEMBER 25, 1870  ☛ About this day, my children, I can tell you nothing—nothing about my feelings, nothing about my mood, nothing, nothing, nothing. I shall just tell you, dryly and plainly, what happened. When I woke up I heard a sound, it grew even louder, I could no longer imagine myself in a dream, music was sounding, and what music!  After it had died away, Richard came in to me with the five children and put into my hands the score of his “Symphonic Birthday Greeting.” I was in tears, but so, too, was the whole household; R. had set up his orchestra on the stairs and thus consecrated our Tribschen forever! The Tribschen Idyll—thus the work is called. — At midday Dr. Sulzer arrived, surely the most important of Richard’s friends! After breakfast the orchestra again assembled, and now once again the Idyll was heard in the lower apartment, moving us all profoundly (Countess B. was also there, on my invitation); after it the Lohengrin wedding procession, Beethoven’s Septet, and, to end with, once more the work of which I shall never hear enough! — Now at last I understood all Richard’s working in secret, also dear Richter’s trumpet (he blazed out the Siegfried theme splendidly and had learned the trumpet especially to do it), which had won him many admonishments from me. “Now let me die,” I exclaimed to Richard. “It would be easier to die for me than to live for me,” he replied.  In the evening Richard reads his Meistersinger to Dr. Sulzer, who did not know it; and I take as much delight in it as if it were something completely new. This makes Richard say, “I wanted to read Sulzer Die Ms, and it turned into a dialogue between us two.” (Cosima Wagner)

The Siegfried Idyll was never intended for the public, but it was only published as a last resort when the Wagner’s were pressed by debt.  For its intimacy and emotion, the Idyll is regarded as one of Wagner’s greatest works.  To learn more about The Siegfried Idyll you can visit The Kennedy Center.  To learn more about the incredible love affair of Richard and Cosima Wagner CLICK HERE.  You can listen to Julie Nesrallah’s “Tempo” every morning from 9am to 1pm EST by visiting CBC Radio 2, and be sure to also visit her website at JulieNesrallah.com. 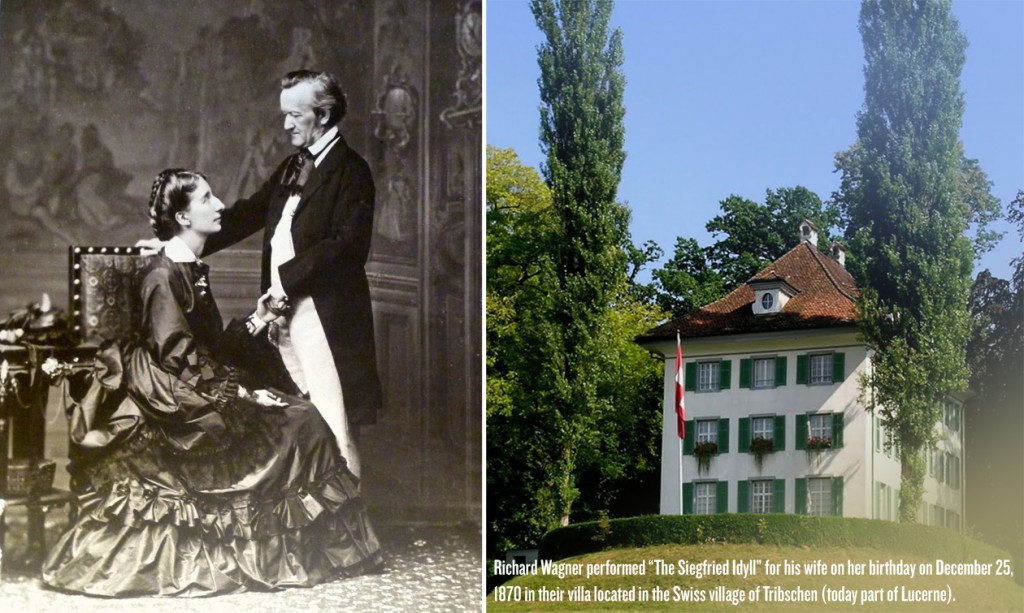