CNN is reporting that victims of abuse by Catholic priests have asked the International Criminal Court to charge Pope Benedict XVI and other top Vatican officials with crimes against humanity, a victims’ group announced Tuesday. The pope and other church leaders “tolerate and enable the systematic and widespread concealing of rape and child sex crimes throughout the world,” the Survivors Network of those Abused by Priests and the Center for Constitutional Rights said in a joint statement. They filed more than 20,000 pages of documents with the international court in the Netherlands to support their charges, they said.  Vatican spokesman Father Federico Lombardi told CNN he was aware of the filing but had no comment.

The International Criminal Court did not immediately respond to a CNN question about whether it believed it had jurisdiction to prosecute the pope.  But Barbara Dorris, the president of SNAP, said it was the natural venue for the case.  “We are convinced this is the proper jurisdiction,” she told CNN. “Who else can investigate violent crimes of a global magnitude? The ICC was created to deal with widespread systematic violent crimes against humanity.” The executive director of the International Bar Association, on the other hand, said it was unlikely the international court would find there was evidence of crimes against humanity.  “This requires a government policy, a plan, a widespread and systematic attack against a civilian population,” Mark Ellis said.  “Not to suggest that victims were not harmed, but to meet the level of crimes against humanity you really have to show that there is a policy or a plan to initiate this,” he said.  People can be held responsible for crimes if they knew – or should have known – they were occurring, Ellis said.  But the blind eye victims accuse the Catholic Church of turning to abuse of children by priests does not rise to the level of crimes against humanity, he suggested.  “They are crimes and they are serious, but within the jurisdiction of the ICC you have to be very specific. I don’t see that you would be able to tick the boxes necessary” to bring a prosecution, he predicted.  That the defendant is the pope – along with three senior cardinals – also raises “jurisdictional hurdles,” he said.

But simply filing the request will force the prosecutor to look at the case, Ellis said.  It “might be beneficial to the plaintiffs to force the court to respond,” he said, saying the filing was more than just a publicity stunt.  “It raises the profile of these issues,” he said.  In addition to the pope, SNAP and the CCF want prosecutions of Cardinal William Levada, the head of the Congregation of the Doctrine of the Faith; Cardinal Tarcisio Bertone, the Vatican Secretary of State; and Cardinal Angelo Sodano, the Dean of the College of Cardinals.

To learn more about why Pope Benedict XVI must face criminal prosecution for the institutionalization of child rape and torture, be sure to visit The New York Times (“Memo To Pope Described Transfer Of Pedophile Priest”) and Slate (“We Can’t Let The Pope Decide Who’s A Criminal”), as well as The Huffington Post (“Bringing The Vatican To Justice”). 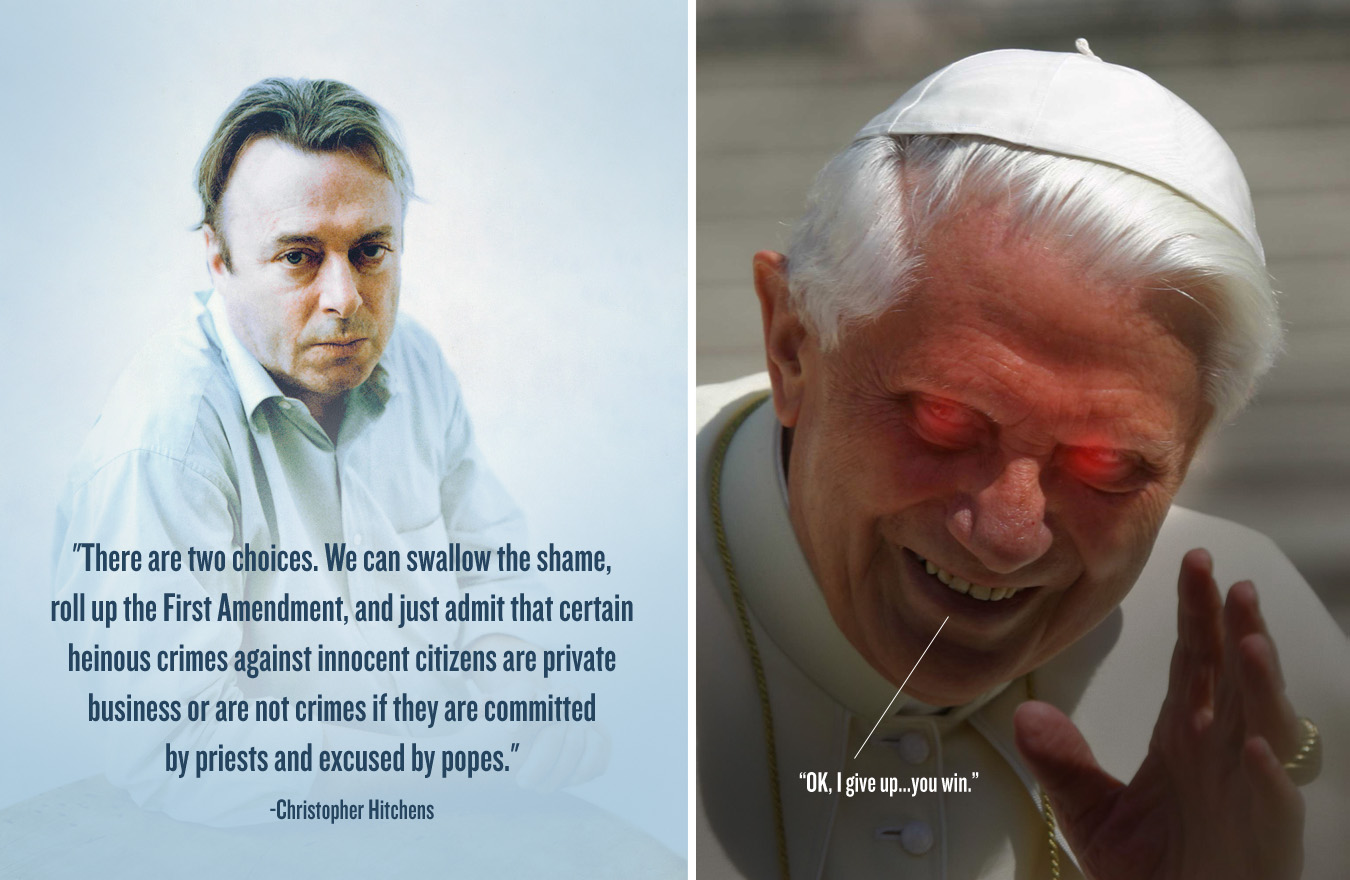 Previous post:
Hurry Up And Listen To M83’s Upcoming Album “Hurry Up, We’re Dreaming” Before You Wake Up Next Post:
My Night With Active Child, Com Truise, And Chad Valley