I couldn’t agree more.  One of the most terrifying reports I have ever seen in my life was last year’s 60 Minutes story on the mounting threat of cyberterrorism.  Their investigation revealed that America has already been infiltrated by a foreign cyberattacker(s) which resulted in several chilling outcomes: the theft of a gargantuan amount of top secret government information, and the planting of “bombs” in the nation’s electrical grid that could be activated with a simple line of code.  The same “bombs” have also been planted in the country’s financial system (imagine the fallout if the nation’s banks were to suddenly lose track of their clients’ financial accounts and credits).  The report should be mandatory viewing as far as I’m concerned, because it provides the viewer with an exceptional understanding of just how serious a threat this is (I’ve attached the report below).  Yesterday, Lockheed Martin, one of the world’s leading aerospace, defense, security, and advanced technology companies, announced that they were cyberattacked, but they successfully shut down the attack before it got into their most sensitive areas.  The U.S. federal government is ramping up its layers of protection and, as The Wall Street Journal is reporting today, making it clear that computer sabotage coming from another country can constitute an act of war, a finding that for the first time opens the door for the U.S. to respond using traditional military force.  Here is an excerpt:

The Pentagon’s first formal cyber strategy, unclassified portions of which are expected to become public next month, represents an early attempt to grapple with a changing world in which a hacker could pose as significant a threat to U.S. nuclear reactors, subways or pipelines as a hostile country’s military. In part, the Pentagon intends its plan as a warning to potential adversaries of the consequences of attacking the U.S. in this way. “If you shut down our power grid, maybe we will put a missile down one of your smokestacks,” said a military official.

… One idea gaining momentum at the Pentagon is the notion of “equivalence.” If a cyber attack produces the death, damage, destruction or high-level disruption that a traditional military attack would cause, then it would be a candidate for a “use of force” consideration, which could merit retaliation.

… Defense officials refuse to discuss potential cyber adversaries, although military and intelligence officials say they have identified previous attacks originating in Russia and China. A 2009 government-sponsored report from the U.S.-China Economic and Security Review Commission said that China’s People’s Liberation Army has its own computer warriors, the equivalent of the American National Security Agency.

To read the full WSJ report be sure to visit The Wall Street Journal. To watch the spine-chilling 60 Minutes report CLICK HERE. 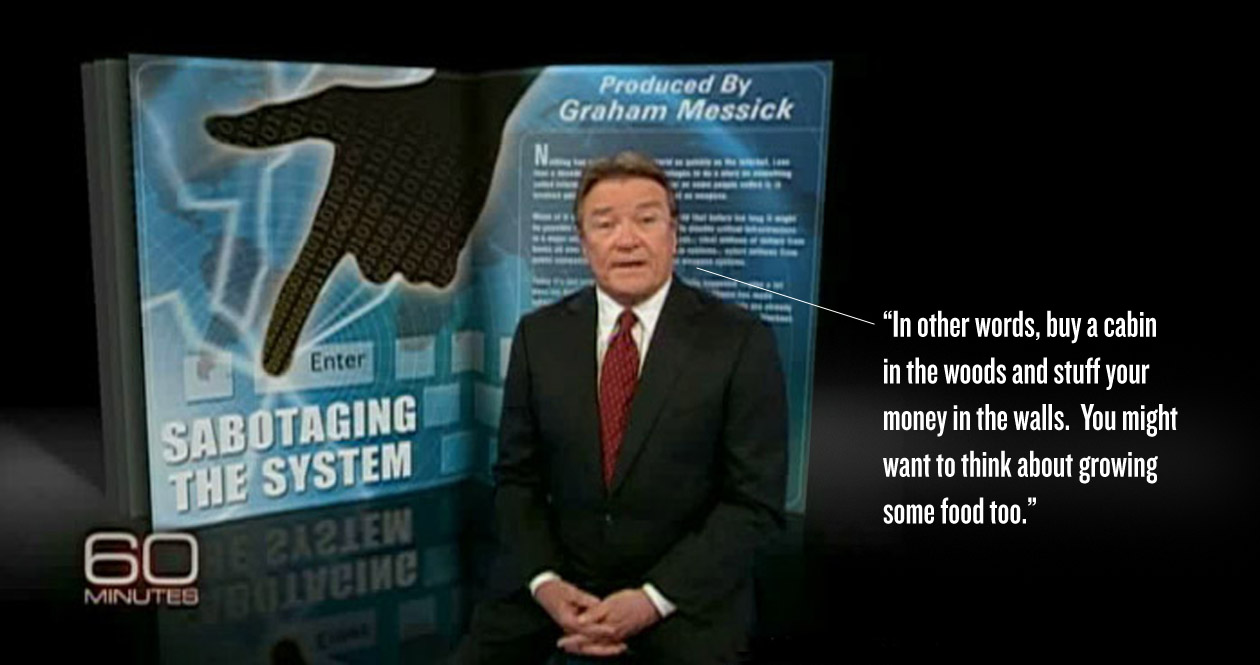