The Playlist just released this first trailer for the upcoming comedy “Bridesmaids” and it looks incredible.  The film just premiered a “99% finished” version of the film at the SXSW Festival and people are seriously buzzing about how amazing this movie is. Kristen Wiig is a national treasure as far as I’m concerned so to see her taking charge like this and carving our her own platform to finally shine like this is amazing to see.  Go Kristen!  Recently, the Los Angeles Times’ Rebecca Keegan sat down with its director, “Freaks and Geeks” creator Paul Feig:

In “Bridesmaids”, Kristen Wiig plays a maid of honor whose life falls into chaos as she plans her best friend’s wedding. Scripted by Wiig and her writing partner Annie Mumolo, produced by Judd Apatow and directed by “Freaks and Geeks” creator Paul Feig, “Bridesmaids” comes with a top-line comedy pedigree. It also stars Maya Rudolph as the friend Wiig is terrified she’s losing, Jon Hamm as the guy she definitely should not be dating and Rose Byrne as her nemesis in wedding planning. Before the film’s midnight premiere at SXSW, Rebecca Keegan talked to Feig about the dearth of good comedies for women, Hamm’s hidden talent and fashion advice every director should heed.

24 Frames: This is Kristen’s first lead in a film. How does she make the transition from character roles to leading lady?

Paul Feig: I cast her in her first actual movie role, “Unaccompanied Minors.” I’ve always been a huge fan of hers and kept up with her. I would get frustrated when I’d see her in movies ’cause they’d either use her too much or they would have her play almost dramatic, so they didn’t use her talents. I wanted to take what she’s funniest at, but then have her grounded and really have her go through the movie-star machine. When you get your first vehicle, you have to come into the machine as people know you, doing what they like about you. And then you go through so many moves and three-dimensional dramatic paces that you come out on the other side a fully realized movie star.

Most studio comedies seem to be written for guys, and the ones written for women leave me cold. Is there an untapped market for this movie?

PF: I’ve always wanted to do female-oriented entertainment. I’ve always related to women more than guys. When I wrote “Freaks and Geeks” I always liked writing the Lindsay character more, just ’cause growing up all my best friends were girls. After “Freaks and Geeks” I got offered all these “high school guys [in search of sex]  kind of movies. I don’t relate to that. I watched a ton of romantic comedies. The ones that are done well like “Annie Hall” and “When Harry Met Sally,” I love those movies. But so many of them are so terrible, and so overwritten. They don’t exist in the real world. They’re very idealized worlds. I always felt that women are so under-served, so it all came together on this project with all these funny women.

The history of “Saturday Night Live” cast members getting their own films is a checkered one. Do you worry about meeting audience expectations for a movie starring Kristen Wiig?

PF: I can see the glaze in people’s eyes. Like, usually when an “SNL” person gets a movie from the old days it’s big and broad and kind of dumb. They’re thinking it’s the “Target lady” sketch. But when audiences would show up for the test screenings, they would engage with her so quickly.

How much do you rely on test screenings to make a film?

PF: I honestly don’t see how you can do a comedy without doing test screenings. A lot of comedies fall down because they didn’t test them enough. As a director it’s very easy to get into the editing room and be very precious about your cuts and your moments. Do a quick cut, and put it in front of an audience before you get precious about anything. Writers and filmmakers will get crazy when they hear this sometimes, cause it feels like you’re not being a true artist. But comedy is such an interactive thing that you can’t dictate what’s funny. I’m obsessed with studying my favorite filmmakers who I’ve seen go off the rails as they get older and become irrelevant, and it usually is because they’re stopped listening to people.

You’ve done a lot of acting in TV and film comedies. Has that affected how you work as a director?

PF: I went to film school but having been an actor is more valuable to me than any proper film training I got. I worked with enough directors who created an environment where you felt intimidated and embarrassed and not able to open up. For comedy, if you’re not comfortable, you can’t do your best work. My whole thing is, you can try anything. I’m gonna throw something at you and if it doesn’t work, I swear to God I won’t use it.

How did Jon Hamm fit in with all the comedy nerds on this film?

PF: He is such a comedy nerd. He will quote lines from “Kids in the Hall: Brain Candy.” You’re quoting something even I can’t quote! He’s always wanted to do comedy. One of the next things I’m developing a project for him to star in. I think he’s so funny. He’s like Cary Grant to me.

You may be the only person in Austin wearing a suit tonight. Why so snazzy?

PF: My father owned an Army Surplus store when we were growing up and every day he wore a suit and tie. Right after “Freaks” I decided I wanted to get back to that. Crews and actors really like it. You become an identifiable figurehead. I always hate when I see directors and they’re in sweatpants. You’ve been given this gift. Step it up.

And for your viewing pleasure, here’s the brand spankin’ new trailer for Bridesmaids: 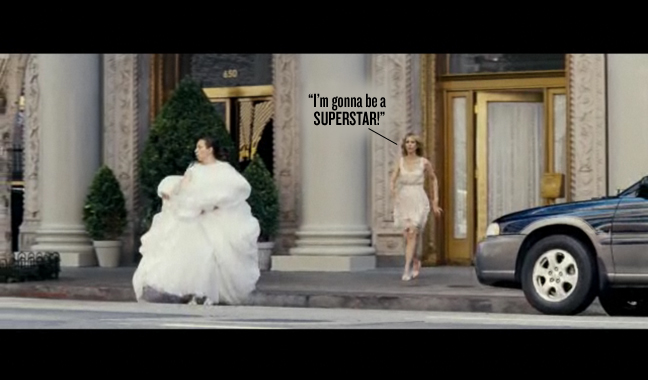 Source: The Playlist and The Los Angeles Times

Previous post:
Incredible IMAX Footage Of Saturn Composed From Real Cassini Orbiter Photographs Next Post:
TIME Magazine Looks At Why Having A Shitty Job Is Worse Than Having No Job At All