Radiohead’s New Album “The King Of Limbs” Available For Presale

I woke up to the most beautiful thing in the world: at 5:17am EST Radiohead launched the presale of their brand spankin’ new album “The King Of Limbs”.  Of course they had to wait until the very next day after the Grammys were handed out as the ultimate “F.U.” to the recording industry.  You can click HERE to buy a varied range of basic to deluxe options between $9.00 and $53.00.  The Guardian also just posted this article asking the question, “Will Radiohead’s ‘The King Of Limbs’ Save The Music Industry?”:

Can Radiohead rescue two ailing industries? Tomorrow night sees theBrit awards take place in London, and with admirable intent, the plan is to focus strictly on the music: the show is being moved from Earls Court to the O2, presenter James Corden is under instruction not to insult the talent and the evening will climax with the announcement of album of the year. But this is set against a 7% decline in sales last year, a growing realisation that digital revenue will always struggle to replace the once lucrative CD market, and a lineup intended to celebrate the best in British music, but which boasts the likes of Mumford & Sons. If that’s the best we can muster, the feeling is that the industry really is broken. So it’s with impeccable timing that this morning Radiohead announced on their website that on Saturday, their new album will be available for download. ‘The King of Limbs’ will cost just £6 as an MP3, or £9 if you want a higher quality WAV version. Or you can spend £33 to get the WAV version plus, in two months’ time, an edition they’re calling “the world’s first Newspaper Album”. This comprises two clear 10″ vinyl records in a purpose-built record sleeve, a CD, and lots of artwork. Presumably, a super-deluxe version will be announced in coming months that will see Thom Yorke appear as a hologram at the foot of your bed to sing the thing. This release breaks with the honesty-box tactic the band initially employed for ‘In Rainbows’ in 2007, but emulates the approach of creating a lavish physical format that the most loyal fans will feel they have to own, whatever the cost. ‘In Rainbows’ was licensed to record companies throughout the world in one-off agreements; in the UK, only the independent label XL enjoyed the flexibility and sensibility to handle such an arrangement. It seems a canny notion, and while the band’s manager, Brian Message, has remained tight-lipped about the commercial success of ‘In Rainbows’, it’s hard to think that Radiohead will lose out financially this time either. What’s not yet clear is why it’s called a “Newspaper Album”. But newspapers – it’s no secret – are suffering the same sort of woes as themusic industry. Is there some hidden clue here for how the print business will find salvation, too? Of course, as with ‘In Rainbows’, what’s not first discussed with ‘The King of Limbs’ is what the thing will sound like. Will it be the epic rock record that some have rumoured, which the industry would so dearly love, a sign that the UK can still produce bands that will tick a box at the Brits or the Grammys? Or will it be more in the tradition of ‘Kid A’, a determinedly singular album? Bearing in mind something Thom Yorke said last year, it’s unlikely that Radiohead will be going out of their way to offer succour to the former camp: “It’s simply a matter of time – months rather than years – before the music business establishment completely folds.” 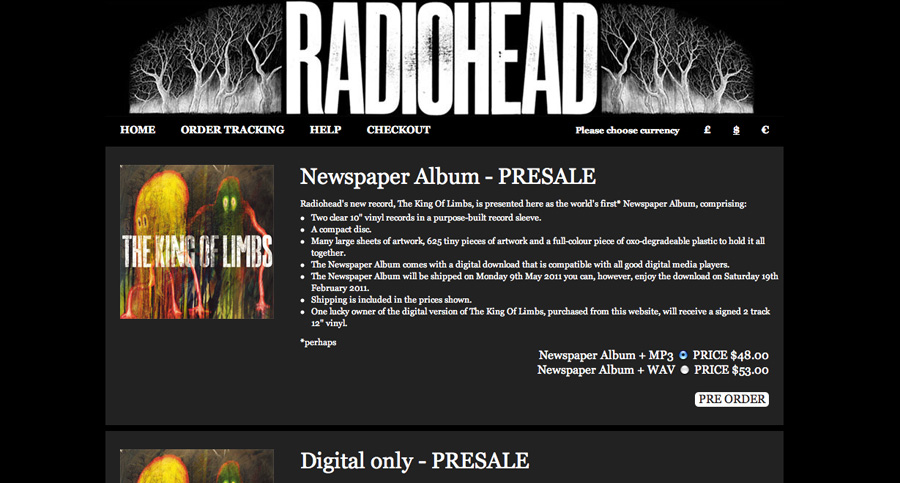 Previous post:
“Never Let Me Go” Author Kazuo Ishiguro Thinks Writers Who Hate Film Remakes Should Get Over Themselves Next Post:
Banner Photo #22